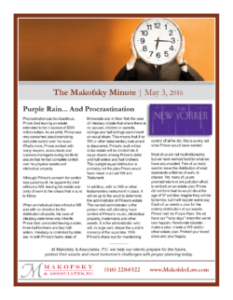 Procrastination can be disastrous. Prince died leaving an estate estimated to be in excess of $300 million dollars. As an artist, Prince was very concerned about exercising complete control over his music. What’s more, Prince worked with many lawyers, accountants and business managers during his life to assure that he had complete control over his physical assets and intellectual property.

Although Prince’s concern for control was paramount, he apparently died without a Will, leaving his estate and body of work to the chaos that is sure to follow.

When an individual dies without a Will and with no direction for the distribution of assets, the laws of intestacy determine who inherits. Prince died unmarried leaving a sister, three half-brothers and two half-sisters. Intestacy is controlled by state law. In both Prince’s home state of Minnesota and in New York the laws of intestacy dictate that where there is no spouse, children or parents, siblings and half siblings each inherit an equal share. This means that if no Will or other testamentary instrument is discovered, Prince’s multi-million dollar estate will be divided into 6 equal shares among Prince’s sister and half-sisters and half-brothers. This outright equal distribution is probably not the plan Prince would have made in a Last Will and Testament.

In addition, with no Will or other testamentary instrument in place, it will be up to the court to determine the administrator of Prince’s estate. The named administrator is the person who will ultimately have control of Prince’s music, intellectual property, trademarks and other assets. It is the administrator who will, in large part, shape the public’s memory of the superstar. With Prince’s sharp eye for maintaining control of all he did, this is surely not what Prince would have wanted.

Most of us are not multimillionaires, but we have worked hard for what we have accumulated. Few of us really want to leave the distribution of what represents a lifetime of work, to chance. Yet, many of us are procrastinators or are just plain afraid to embark on an estate plan. Prince did not think that he would die at the age of 57 and few imagine they will die tomorrow, but it will happen some day. Each of us needs a plan for the orderly distribution of our assets. Prince had his Purple Rain. We all have our “rainy days” when the worst can happen. Ameliorate disaster — make a plan, create a Will and/or other estate plan. Protect your loved ones and your legacy. 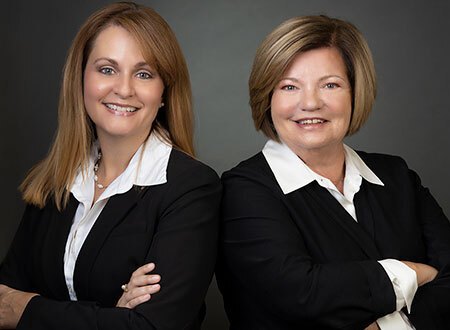